A WORD FROM THE SCIENTIFIC DIRECTOR 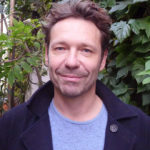 The CESAB has moved to Montpellier after 8 years of in Aix-en-Provence. 2018 has been a year of transition and we are still adjusting to our new environment in 2019! Moving has been an incredible challenge and I want to thank here the former CESAB director and staff as well as the FRB for having worked hard to make it happen.By bringing together the best international scientific teams around scientific synthesis, combining data, models and concepts, the work of CESAB should enable us to better understand the functioning of biodiversity, its state and its dynamics, from local to global scales. By shedding some light on the organization of ecological systems and socio-ecosystems, CESAB should help us address the complexity of these systems and the conditions of their resilience.
Moving to Montpellier is for the CESAB a great opportunity to evolve and match the new challenges of biodiversity science. There is a real need for us to secure more funding for open calls but also to open our calls and the CESAB to other actors concerned with biodiversity research and conservation. IPBES 7th Plenary in Paris has been an incredible catalyzer for biodiversity science, and I hope we will meet together the challenge we face to provide both an understanding of biodiversity dynamics and large-scale predictions of its fate in a changing world.

For us, these last months have been the occasion for rethinking our functioning and to test some new tools and initiatives, we have hired new staff, launched two specific calls: one with the AFB (French Agency for Biodiversity) and one joint call with the sDiv (German Biodiversity Synthesis Center), renewed our scientific comity, are working to propose formation for students, and have done our best to help the ongoing and new CESAB groups. This has been done in only few months, which illustrates our collective motivation to continue the CESAB and to help more than ever the scientific community working on biodiversity. I want here to thanks the new FRB staff dedicated to CESAB without whom I would never have survived to this first half of 2019 and all FRB team for their trust and help! I also want to make homage to Eric Garnier and Alison Specht, former scientific directors of the CESAB, who have worked to make the CESAB a leading research organization with a high scientific level and international influence.

Biodiversity centers are the right tools to meet the challenges we face with the biodiversity crisis. I really hope 2019 will be the year when public and private actors concerned with the state of biodiversity, will realize how much we have a collective responsibility to give these centers the means they need to support the science of biodiversity synthesis! 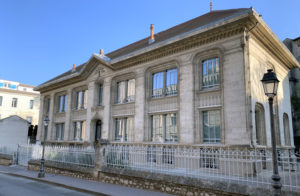 Initially located in Aix en Provence, CESAB moved in January 2019 to Montpellier. By joining one of the world’s most dynamic scientific communities in ecology (the University of Montpellier was ranked world’s leading university in Ecology by ARWU in 2018 and 2019), this is an opportunity for the CESAB to renew its team and to start a fresh development.

Researchers can find at CESAB the necessary means and infrastructure to share and enhance existing information, and to conduct analyses that address major scientific challenges in biodiversity research. Advancing knowledge, developing synthesis research and collaboration, facilitating the links between all scientific disciplines: these are the main assets of CESAB which host a large number of researchers every year from all the continents, during work sessions spread over the project timeline.

CESAB renewed its scientific committee and is composed of 19 researchers. Their missions are to prepare and evaluate calls for proposals as well as to support CESAB actions and working groups.

The CESAB launched last months two calls for proposals: one with the support of the French Agency for Biodiversity (AFB) on endocrine disruption and biodiversity (pre-proposals are now under evaluation), and one with the sDiv on the coexistence and stability in high-diversity communities.

CESAB and sDiv are instruments of the French FRB (Foundation for Research on Biodiversity) and German iDiv (German Centre for Integrative Biodiversity Research Halle-Jena-Leipzig). Two groups of 5-7 researchers will be funded and will share their meetings between the two centers.
Modern coexistence theory provides a useful framework for understanding the coexistence of dominant species, but is limited to few interacting species, and is not predictive or extendable to novel or real setting contexts. This joint call aims at fostering a synthesis to understand coexistence and stability in typical high-diversity communities that are often composed of relatively few dominant species and many low-abundance species.
Upcoming events and courses 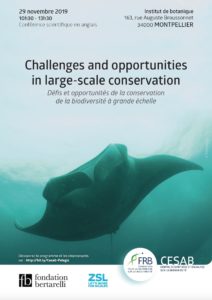 The working group Pelagic and the CESAB are organizing a symposium in Montpellier on Friday the 29th of November 2019. During this symposium a groups of international researchers will present the new challenges associated with monitoring both wildlife and human activities in Protected Area using up to date technologies. 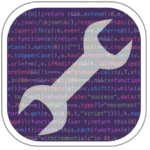 CESAB and the GDR Ecostat will dispense a 5-days workshop from the 2nd to the 6th of December 2019 in Montpellier, untitled Data Toolbox for Ecologist. The objective of this workshop is to train young researchers in good practices in biodiversity research (data access and management, visualization, versioning, reproducibility, packages development), using open source softwares (R, Python, git, markdown). This workshop will be given in French.

There are currently 9 groups working with CESAB, including 4 starting this year.

Causes and consequences of functional rarity from local to global scales

Evaluation of global impact of storms on phytoplankton freshwater communities

Towards ‘just conservation’: linking theories and practices of justice in biodiversity conservation

Spatio-temporal variability of coral reefs at the global scale: causalities, idiosyncrasies and implications for ecological indicators

Origin and congruence of taxonomic, functional and phylogenetic diversity of the Mediterranean trees 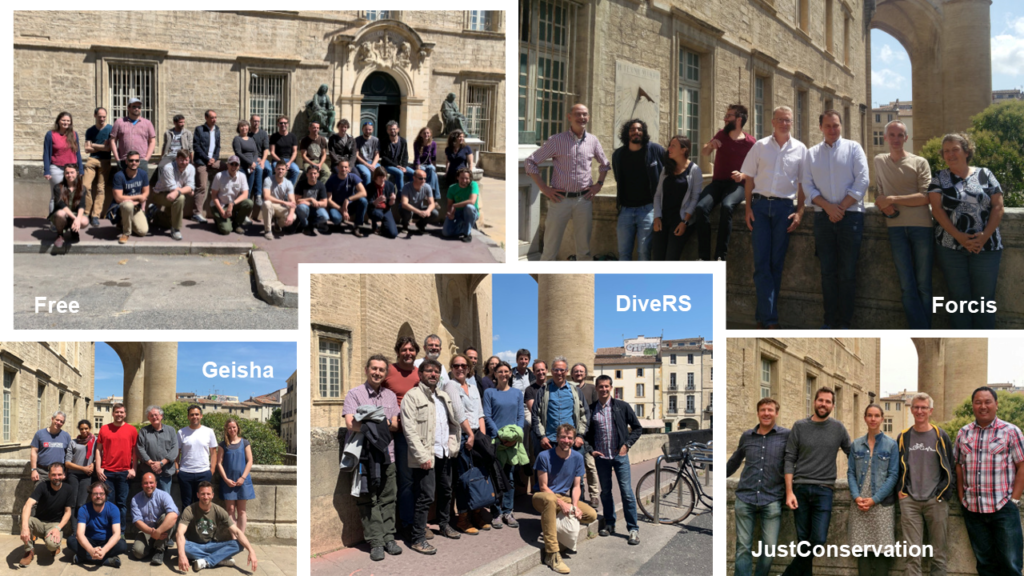 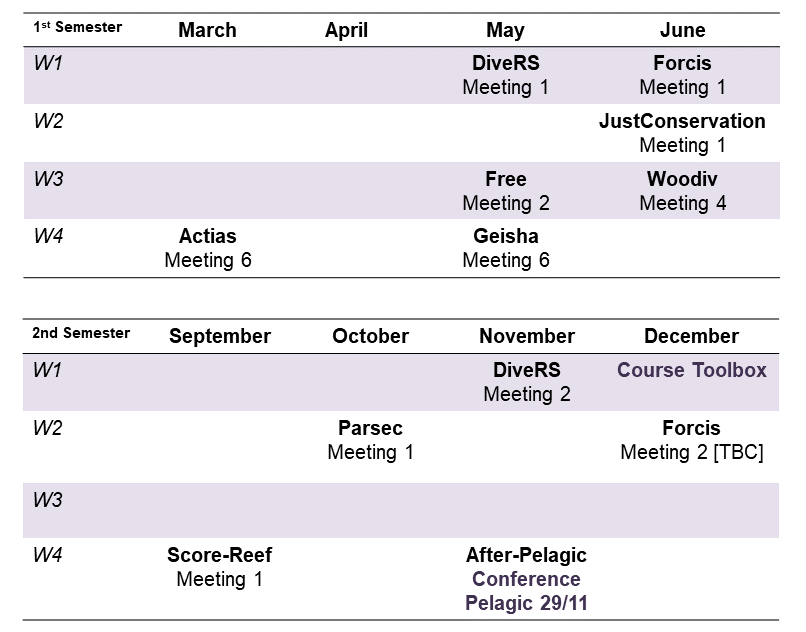 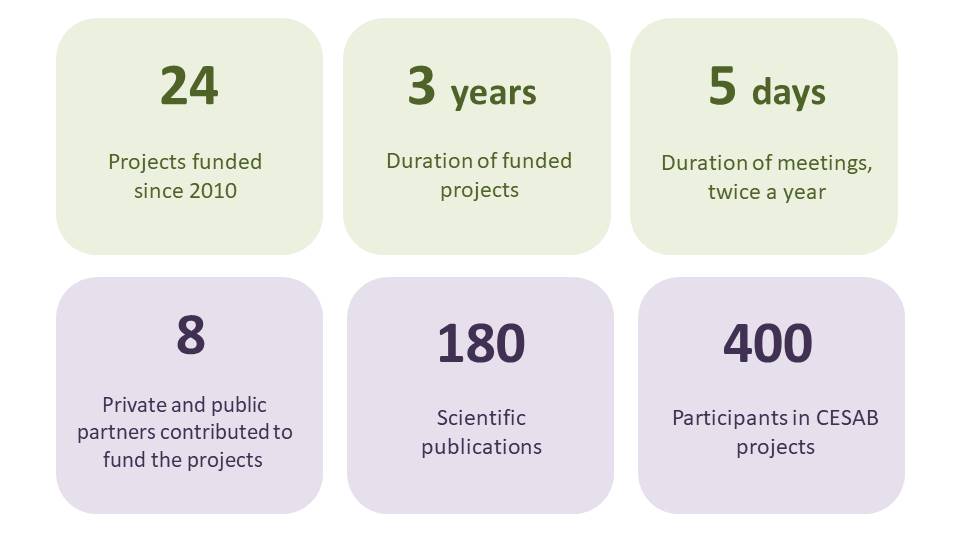