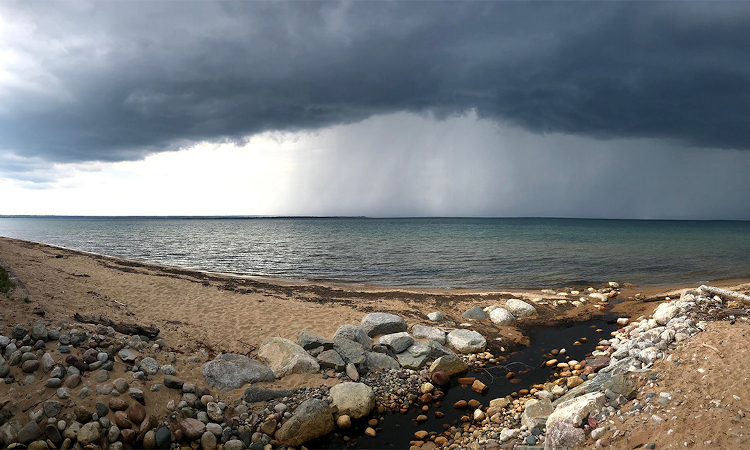 People depend on lakes for many ecosystem services such as water, food, transportation, and recreation, but these services are at an unknown level of risk because we do not understand how lakes are affected by climate change. A network of 39 scientists from 20 countries on five continents are collaborating to put long-term and high-frequency data to work to understand, predict, and communicate the role and response of lakes in our changing global environment. This work was partly funded by the John Wesley Powell from U.S. Geological Survey and the Foundation for Research on Biodiversity (FRB), through the research projects GEISHA of the FRB’s Center for Biodiversity Synthesis and Analysis (CESAB).

Many of the scientists hypothesized that storms would have strong impacts on water temperature and water column mixing, based on a prior synthesis study. However, the team’s most recent study found that wind- and rainstorms do not cause major temperature changes in lakes.

“Because storm-induced changes to lake temperature were minimal overall, storm-induced changes in other environmental conditions such as nutrient concentrations or light may have larger impacts on lake animals and plants,” said Jonathan Doubek, Assistant Professor at Lake Superior State University in the School of Natural Resources & Environment and the Center for Freshwater Research and Education, who joined the network while at the University of Vermont. These findings represent concrete progress in understanding how lakes are weathering storms.

“Professor Doubek’s study highlights the usefulness of high-frequency data: we were able to discover that the effect of storms on lake temperatures may not be as strong as we previously believed,” said Dr. Jason Stockwell, Professor and Director of the Rubenstein Ecosystem Science Laboratory at the University of Vermont.

The team of scientists has begun analyzing the impact of storm-related changes in nutrient concentrations and light availability on organisms using the same global dataset and has recently had a proposal funded to help continue this work into the future. “The power of global collaborative teamwork to pool data and ideas is improving our understanding about how our planet functions and may function in the future,” Stockwell said. “We need this information to protect ecosystem and human health.”