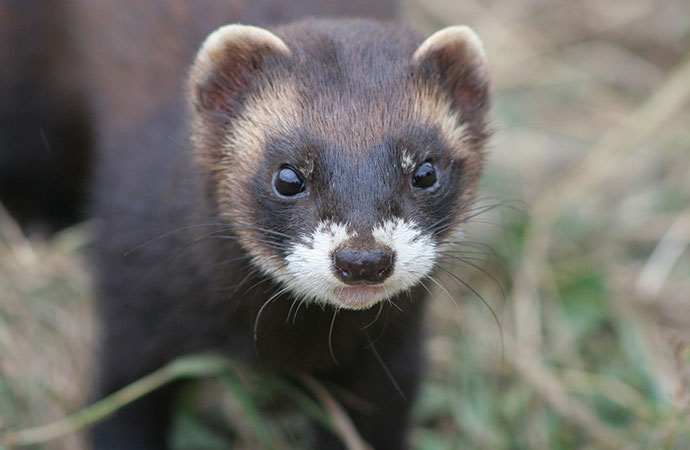 Its bad reputation precedes it. It is accused of smelling, of “screaming loudly”, and more recently of sexism through the character of Pepe the Polecat. But, the polecat, this small mustelid, we know little or nothing about it. This is the observation made by researcher Sébastien Devillard and his team, who received the Barbault and Weber “Involved Ecology” grant in 2021 to fill this knowledge gap: “The polecat is a species that is difficult to observe and study because it is a cryptic and nocturnal animal. It lives in low density territories where males and females only cross paths during reproduction”, explains the researcher.

The Curriculum of the polecat is therefore quite short. As an adult, this small mustelid weighs between 600 grams and 1.5 kg, has the diet of an omnivore, mainly meat, and lives in open and wooded areas, often near wetlands. “However,”, continues Sébastien Devillard, “we have noticed that for the past 30 or 40 years, the wetlands, and riparian forests, which are its preferred habitat, have been steadily deteriorating. In all likelihood, that this had and continues to have an impact on the populations of this species.”

If its conservation status is not considered to be at risk by IUCN, it is once again due to a lack of knowledge on this topic according to the researcher: “When IUCN does not have the exact number of individuals living in a territory to monitor its temporal evolution, it looks to see if the distribution area of this species has decreased independently of the population densities. However, the polecat is still present in Europe over a distribution area that seems stable, which is why IUCN has not classified it as a threatened species. “However, local studies carried out by naturalists using photographic traps, or by national organizations responsible for collecting signs of presence, such as visual observations or roadside kills, suggest that the number of such signs of presence has been steadily declining for the last twenty years, particularly in wetlands.” To change its conservation status and justify the implementation of in situ conservation programmers, scientists will have to adopt a conservation biology approach that will study the polecat’s space use and population size.

The research team is therefore committed to understanding how this small mustelid uses and selects its habitat, in particular its dependence on wetlands and protected areas. At the Pierre Vérots Foundation estate in Ain, the research team plans to fit three polecats with GPS collars to track their movements and identify the determinants of their use of space. “This is a world first, stresses the researcher. For a long time, we were limited by the size of GPS collars, which required large batteries to operate and ensure sufficiently long tracking to obtain useful information. “In ecology, the rule is that animals cannot be fitted with collars that exceed 3 to 5% of their weight. Until then, only larger mammals, from a few kilograms up to giraffes or elephants, benefited from this type of tracking to respect the ethical and animal welfare dimension. The miniaturization of batteries has changed the situation: “Once the polecats are fitted with the equipment, we will be able to go out into the field every week to download the data, which will give us extremely detailed and unprecedented information on the use of space by this species.”

The technique is revolutionary in many ways. Previously, the data collected came from VHF radio collars. To locate the individuals studied, the scientists had to visit the area several times a week and triangulate by positioning themselves at three different locations to pick up the signal from the radio collars. “This classic radio-tracking technique did not allow for more than two or three locations per week. Thanks to the GPS collars, this team of scientists will now be able to obtain data on the polecat’s occupation of space and on its pace of activity throughout the day.

This project is only the first step in a larger ambition: “If we manage to show that this device works, we will be able to expand our study area and fit more animals.” The goal? To obtain more data and carry out survival analyses, which will then enable demographic models to estimate the size of the population locally and the rate of population growth. At the same time, researchers want to deploy a photo-trapping protocol to estimate local polecat density. Scientists will thus be able to propose new arguments for the study of its conservation status and perhaps also change the way our society looks at this small, discreet mustelid.