Groundbreaking global study is the first to map ocean areas that, if strongly protected,  would help solve climate, food and biodiversity crises. 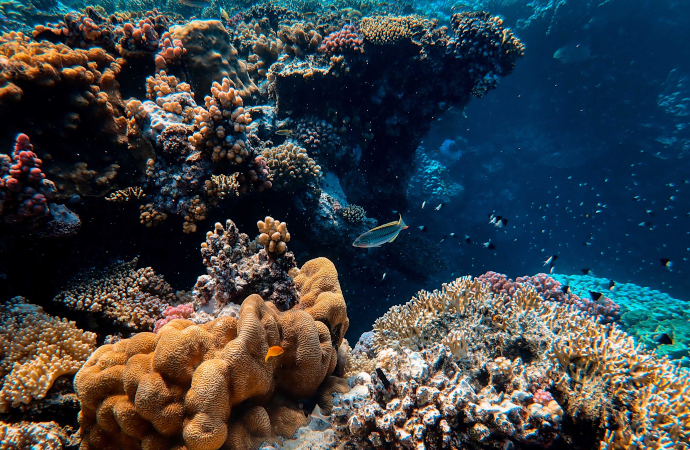 A new study published in the prestigious peer-reviewed scientific journal Nature today offers a combined solution to several of humanity’s most pressing challenges. It is the most comprehensive assessment to date of where strict ocean protection can contribute to a more abundant supply of healthy seafood and provide a cheap, natural solution to address climate change—in addition to protecting embattled species and habitats.

An international team of 26 authors – including researchers from Ifremer and the University of Montpellier and with the CNRS – identified specific areas that, if protected, would safeguard over 80% of the habitats for endangered marine species, and increase fishing catches by more than eight million metric tons. The study is also the first to quantify the potential release of carbon dioxide into the ocean from trawling, a widespread fishing practice—and finds that trawling is pumping hundreds of millions of tons of carbon dioxide into the ocean every year, a volume of emissions similar to those of aviation. This work was partly funded by the Foundation for Research on Biodiversity (FRB), EDF and the Total Foundation, through the FREE and PELAGIC research projects of the FRB’s Center for Biodiversity Synthesis and Analysis (CESAB).

“Ocean life has been declining worldwide because of overfishing, habitat destruction and climate change. Yet only 7% of the ocean is currently under some kind of protection,” said Dr. Enric Sala, explorer in residence at the National Geographic Society and lead author of the study, Protecting the global ocean for biodiversity, food and climate.

“In this study, we’ve pioneered a new way to identify the places that—if strongly protected—will boost food production and safeguard marine life, all while reducing carbon emissions,” Dr. Sala said. “It’s clear that humanity and the economy will benefit from a healthier ocean. And we can realize those benefits quickly if countries work together to protect at least 30% of the ocean by 2030.”

To identify the priority areas, the authors—leading marine biologists, climate experts, and economists—analyzed the world’s unprotected ocean waters based on the degree to which they are threatened by human activities that can be reduced by marine protected areas (for example, overfishing and habitat destruction). They then developed an algorithm to identify those areas where protections would deliver the greatest benefits across the three complementary goals of biodiversity protection, seafood production and climate mitigation. They mapped these locations to create a practical “blueprint” that governments can use as they implement their commitments to protect nature.

The study does not provide a single map for ocean conservation, but it offers a first-in-kind framework for countries to decide which areas to protect depending on their national priorities. However, the analysis shows that 30% is the minimum amount of ocean that the world must protect in order to provide multiple benefits to humanity.

“There is no single best solution to save marine life and obtain these other benefits. The solution depends on what society—or a given country—cares about, and our study provides a new way to integrate these preferences and find effective conservation strategies,” said Dr. Juan S. Mayorga, a report co-author and a marine data scientist with the Environmental Market Solutions Lab at UC Santa Barbara and Pristine Seas at National Geographic Society.

The study comes ahead of the 15th Conference of the Parties to the United Nations Convention on Biological Diversity, which will gather end of 2021 in Kunming, China. The meeting will bring together representatives of 190 countries to finalize an agreement to end the world’s biodiversity crisis. The goal of protecting 30% of the planet’s land and ocean by 2030 (the “30×30” target) is expected to be a pillar of the treaty. The study follows commitments by the United States, the United Kingdom, Canada, the European Commission and others to achieve this target on national and global scales.

“Solutions with multiple benefits are attractive to people and leaders alike. Our pioneering approach allows them to pinpoint the places that, if protected, will contribute significantly to three big problems at once—food security, climate change, and biodiversity loss.  Our breakthrough in methodology can bring multiple benefits to nature and people,” said Dr. Sala.

The report identifies highly diverse marine areas in which species and ecosystems face the greatest threats from human activities. Establishing marine protected areas (MPAs) with strict protection in those places would safeguard more than 80% of the ranges of endangered species, up from a current coverage of less than 2%. The authors found that the priority locations are distributed throughout the ocean, with the vast majority of them contained within the 200-mile Exclusive Economic Zones of coastal nations.

The additional protection targets are located in the high seas—those waters governed by international law. These include the Mid-Atlantic Ridge (a massive underwater mountain range), the Mascarene Plateau in the Indian Ocean, the Nazca Ridge off the west coast of South America and the Southwest Indian Ridge, between Africa and Antarctica.  “Perhaps the most impressive and encouraging result is the enormous gain we can obtain for biodiversity conservation with   of the ocean being protected—if we carefully chose the location of strictly protected marine areas,” said Dr. David Mouillot, a report co-author and a professor at the Université de Montpellier in France. “One notable priority for conservation is Antarctica, which currently has little protection, but is projected to host many vulnerable species in a near future due to climate change.”

Shoring up the Fishing Industry

The study finds that smartly placed marine protected areas (MPAs) that ban fishing would actually boost the production of fish—at a time when supplies of wild-caught fish are dwindling and demand is rising. In doing so, the study refutes a long-held view that ocean protection harms fisheries and opens up new opportunities to revive the industry just as it is suffering from a recession due to overfishing and the impacts of global warming.

“Some argue that closing areas to fishing hurts fishing interests. But the worst enemy of successful fisheries is overfishing—not protected areas.” Dr. Sala said. The study finds that protecting the right places could increase the catch of seafood by over 8 million metric tons relative to business as usual.“It’s simple: When overfishing and other damaging activities cease, marine life bounces back,” said Dr. Reniel Cabral, a report co-author and assistant researcher with the Bren School of Environmental Science & Management and Marine Science Institute at UC Santa Barbara. “After protections are put in place, the diversity and abundance of marine life increase over time, with measurable recovery occurring in as little as three years. Target species and large predators come back, and entire ecosystems are restored within MPAs. With time, the ocean can heal itself and again provide services to humankind.”

The study is the first to calculate the climate impacts of bottom trawling, a damaging fishing method used worldwide that drags heavy nets across the ocean floor. It finds that the amount of carbon dioxide released into the ocean from this practice is larger than most countries’ annual carbon emissions, and similar to annual CO2 emissions from global aviation.

“The ocean floor is the world’s largest carbon storehouse. If we’re to succeed in stopping global warming, we must leave the carbon-rich seabed undisturbed. Yet every day, we are trawling the seafloor, depleting its biodiversity and mobilizing millennia-old carbon and thus exasperbating climate change. Our findings about the climate impacts of bottom trawling will make the activities on the ocean’s seabed hard to ignore in climate plans going forward,” said Dr. Trisha Atwood of Utah State University, a co-author of the paper.

The study finds that countries with the highest potential to contribute to climate change mitigation via protection of carbon stocks are those with large national waters and large industrial bottom trawl fisheries. It calculates that eliminating 90% of the present risk of carbon disturbance due to bottom trawling would require protecting only about 4% of the ocean, mostly within national waters.

The study’s range of findings helps to close a gap in our knowledge about the impacts of ocean conservation, which to date had been understudied relative to land-based conservation.

“The ocean covers 70% of the earth—yet, until now, its importance for solving the challenges of our time has been overlooked,” said Dr. Boris Worm, a study co-author and Killam Research Professor at Dalhousie University in Halifax, Nova Scotia.  “Smart ocean protection will help to provide cheap natural climate solutions, make seafood more abundant and safeguard imperiled marine species – all at the same time. The benefits are clear. If we want to solve the three most pressing challenges of our century—biodiversity loss, climate change and food shortages —we must protect our ocean.”